Sights and places of interest

With a population of approx. 1.8 million people, Hamburg is the second largest city in Germany after Berlin.

The urban area is divided into seven districts and 104 sub-districts, including a group of islands located in the North Sea.

The Port of Hamburg is the largest seaport in Germany and one of the largest transshipment ports in the world. It also offers many sights, such as the St. Pauli Landungsbrücken and the fish market. Visitors to the musicals in the musical theaters along the Elbe take the harbor ferry to the other side of the Elbe River. In early 2017, Hamburg's new modern concert hall, the Elbphilharmonie, opened in the so-called HafenCity. 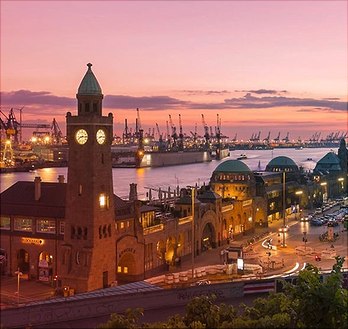 The historic Speicherstadt is adjacent to the HafenCity. It is the largest warehouse complex in the world and extends over 26 hectares between Baumwall and Oberhafen. Since July 2015, the Speicherstadt, together with the Kontorhaus district including the Chilehaus, has been Germany's 40th UNESCO World Cultural Heritage Site.

Hamburg’s landmark is the Protestant main church St. Michaelis, the "Michel". Particularly impressive are the nave with the five organs, the vaulted cellar and the incredible view from the steeple. With its 132 meters, the church steeple towers above most of the buildings in the city center and can be seen from many angles.

Hamburg's most characteristic body of water next to the Elbe is the Alster. Cruises on the Binnen- and Außenalster as well as walks around the water are very popular with locals and tourists alike.

The Jungfernstieg stretches along the southern bank of the Alster. The historic promenade is the linchpin in the center of the Hanseatic city. Its name goes back to a Sunday rite of wealthy Hamburg families in the middle of the 17th century. When the weather is good, locals and visitors alike enjoy the panorama.

The park Planten un Blomen is only a short walk away from the Binnenalster. It was created on a part of the former Hamburg ramparts and is a must for every nature lover. As one of the greenest attractions of the Hanseatic city, the park invites you to sunbathe and relax.

The City Park (“Stadtpark”) in Winterhude is the third largest public green space in the Hanseatic city with almost 150 hectares. It is used for recreation, leisure activities and offers several art objects. In the north-western part of the park is the planetarium, which was initially built as a water tower between 1912 and 1916. It is one of the longest-serving star theaters in the world and, after a two-year renovation phase, also one of the most modern.

Enjoy your stay in Hamburg!

We are looking forward to your visit!